The 2020 hurricane season is officially over! November 30 marked the end of a record-breaking Atlantic hurricane season with 30 named storms. Back in May, NOAA’s Climate Prediction Center predicted an above average season, forecasting 13 to 19 named storms, of which 6 to 10 would become hurricanes, and 3 to 6 of these would intensify into major hurricanes (max sustained winds of > 110 mph). So, how did this season compare? 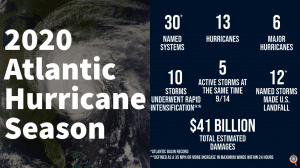 We also ran through the entire list of names and had to start using the Greek alphabet to name storms for the first time since 2005, and for the second time ever. Some of these late season storms were quite powerful, especially Eta and Iota, which both made landfall in Nicaragua as category 4 hurricanes. Normally, these names would be retired, due to the extensive damage they caused. As of now, the World Meteorological Organization has indicated that they will not retire any Greek letters but will instead consider retiring the letter with the year that storm occurred in (ex. Iota 2020).  As we go into the offseason, I am sure there will be many discussions amongst professional meteorologists as to the best possible naming structure to avoid this dilemma in the future. One thing is for sure, the 2020 hurricane season has left its mark in the history books.