Autumn – The Changing of the Seasons 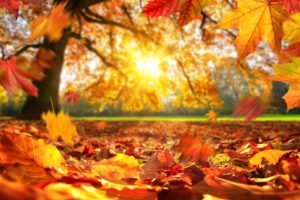 Autumn is that time of year that lands between the heat of summer and the cold of winter. As the summer heat comes to an end, we all start to notice that the sun rises later each morning while setting earlier each evening. In addition, the nights are cooler. Vegetation growth slows down or ends. Animals prepare for the upcoming winter or begin migrating to warmer climates. For those of us that live in the Northern Hemisphere, autumn begins on September 22nd or 23rd. But what causes it?

All seasons are caused by the tilt of Earth’s axis while orbiting the sun. Most of us would think that the earth is closest to the sun during summer and furthest during winter, but this is incorrect. In fact, it is just the opposite! So, the earth spins around an axis that is essentially an imaginary pole that runs through the center of the Earth from North to South Poles. Obviously, it takes approximately 24 hours (actually, it’s slightly less than 24 hours) for the earth to complete one rotation. This explains why there is day and night. This also the reason seasons exist, because this axis is tilted, and not vertical. Earth’s tilted axis never changes as it orbits the sun, and always points in the same direction. So, what causes the change in seasons?

Autumn is that transitional period when the sun shines equally on the Northern and Southern Hemispheres (fall equinox). The same is true in the spring (spring equinox). However, as autumn rolls on and the earth continues its orbit around the sun, the Northern Hemisphere slowly goes from pointing towards the sun to further and further away from it. As a result, the days become increasingly shorter as there is less sunlight. The nights also become longer. This results in lower temperatures during both the day and night.

Even though autumn signals upcoming change and is the foreshadow of winter, it is also a beautiful time of year. Obviously, it is a time of harvest and celebration, but the main signal of autumn or fall is the changing color of the leaves which will all eventually “fall” off by the end of autumn or start of winter (December 21st or 22nd).