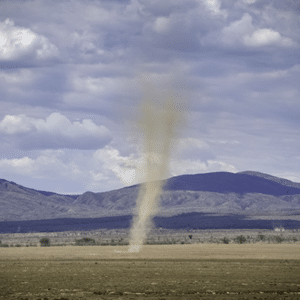 As the Earth spins, so do many weather phenomena.

A comparative look at weather features that rotate; from small dust devils to massive superstorms.

The spin of the Earth helps generate many of our planet’s natural phenomena from global ocean currents to atmospheric wind flow and weather patterns. Many types of weather are associated with some type of rotating weather phenomenon. Most of us have learned at some point in our lives about high and low pressure systems and that, in the northern hemisphere, high pressure spins clockwise and low pressure spins counter-clockwise. Many other weather phenomena spin as well, from large storms that cover thousands of square miles down to a small dust-devil a few feet wide. Here are a few such phenomena and how they compare:

Dust devils are among the smallest of rotating weather phenomena. They form on hot sunny days, kicking up dust that gets carried up into a funnel, giving the dust devil its appearance and its name. They can last for several minutes and grow to over a hundred feet tall. The funnel is rarely more than a few feet wide at its base. However, it can spin up to over 60 mph and toss lightweight outdoor objects such as tents and canopies.

Fair-weather waterspouts form over warm water in the vicinity of cumulus clouds or rain showers and form a visible funnel at the base of the overhead cloud. They take on the appearance of a tornado, but are generally smaller and much weaker by comparison. They are similar in strength to dust devil. If one moves ashore, it can cause minor damage and toss beach umbrellas and lightweight objects before dissipating.

Unlike dust devils and fair-weather waterspouts, tornadoes are much stronge. They normally grow much larger and can produce the strongest winds on Earth. A tornado initially forms within a severe thunderstorm and becomes classified as a tornado when its funnel reaches down to the ground. They vary in width from under 100 feet to over a mile, and can track for several miles producing significant damage to trees and buildings, sometimes destroying entire communities and taking lives. When a tornado develops or tracks over a body of water, it is referred to as a “tornadic waterspout”, but should not be confused with a “fair-weather waterspout”.

Low pressure systems, also known as mid-latitude cyclones, are generally the largest of commonly known spinning weather phenomena. They normally span several hundreds of miles and impact large areas with varying degrees of wind, cloud-cover and precipitation. Most low pressure systems are weak and not well organized, and bring weather that is typical to everyday life. They are generally not considered “storms” unless they become strong and produce hazardous weather conditions. On some occasions, they form into intense well-organized storms that bring heavy precipitation and strong winds. In the northeastern U.S. during the winter months, they can form into powerful coastal storms known as “Nor’easters”.

Tropical cyclones are large wind and rain producing cyclones that form over warm ocean waters. They are a form of low pressure that develop in tropical marine climates. In the north Atlantic and eastern Pacific oceans, they are called “hurricanes” when they mature to produce winds of 74 mph or greater. They range in size with hurricane force wind-fields typically 100 to 200 miles across and can sometimes produce sustained winds over 160 mph. Tropical cyclones are considered the most powerful weather phenomenon, causing widespread wind damage and devastating floods from rain and storm surge when they make landfall.

Superstorm is a general term which describes a rare and unusually large and intense low pressure. There is no specific criteria for classifying a superstorm. The term tends to surface as a reference when a very large and powerful storm makes national news headlines. “Superstorm Sandy” was one such superstorm back in 2012. Sandy formed from a hurricane and grew to over 600 hundred miles in width. It battered New York and New Jersey with damaging winds and a devastating storm surge comparable to a major hurricane. Other superstorms can form when two or more strong low pressure systems merge to form one larger, more powerful storm.

On any given day, except for superstorms, many of the aforementioned spinning weather phenomena are occurring somewhere on the planet. Some of them are fascinating to observe, such as a dust devil or small fair-weather waterspout. Others are very dangerous and should be avoided, such as tornadoes and hurricanes.