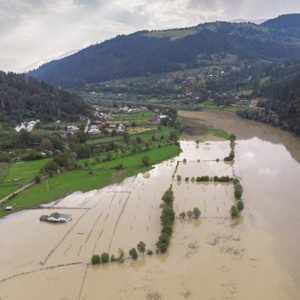 Experts From Different Fields Working Together

Experts working together is always the best way to effectively and cohesively prepare a legal case. Often the knowledge of experts in different fields overlaps, and it is always best to have the most qualified expert to present each aspect in the case. CompuWeather was hired to produce a weather analysis for the plaintiff in a class action lawsuit where several homeowners’ properties were destroyed by a flash flood from nearby creeks and streams after a rainstorm.

The plaintiffs in the class action lawsuit hired an attorney to illustrate that a mining company excavated a large area of terrain which they alleged changed the runoff patterns causing the rain to run off at a greater volume and velocity than it did prior to the mining activities. The plaintiff’s attorney argued that the mining company did not follow legal protocol to remediate rainfall runoff patterns after their excavation, and was therefore responsible for the loss of property from the flood that followed.

A CompuWeather expert was hired by the plaintiff’s attorney to do a forensic weather analysis of the rainfall that occurred over specific watersheds in the area where the mining activity took place. In the process of producing the forensic weather analysis, CompuWeather coordinated with a hydrologist that provided the specific watershed basins so that CompuWeather’s expert could analyze Doppler radar data and determine the specific rainfall totals that occurred over those basins. Once the rainfall totals were determined, the hydrologist provided an analysis of the volume of water that fell and the runoff pattern that the rainfall took based on the disturbed land.

The hydrologist then coordinated directly with the mining expert to understand the effect that the rainfall event would have had on the properties if the mining company had followed protocol to remediate the disturbed land after completing their mining activities. All of the evidence was presented to a jury and the jury found in favor of the plaintiffs, stating that the cause of the flooding and loss of property was the result of the mining activities.