It is hard to believe that is has been nearly 30 years (28 years to be exact) since the historic March 1993 Superstorm that impacted all areas from the Gulf Coast to New England. This storm will always be remembered for its incredible snowfall totals from Mississippi to Maine, damaging winds along the east coast, and tornadoes in Florida.

It all began on 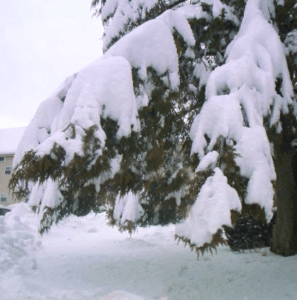 March 12th, 1993 when a surge of arctic air settled all the way into the Gulf of Mexico and then across the eastern seaboard. This set the stage for a strong baroclinic zone (a region in which a strong temperature gradient develops) and this resulted in a complex of thunderstorms developing off the coast of Texas. By the evening of March 12th, conditions quickly became favorable for rapid development, as an area of strong upper-level winds or jet streak merged with the thunderstorms and the result was the birth of a very powerful storm system which began tracking across the Gulf of Mexico. The rapid development of this storm was incredible and by the time it moved across the Florida panhandle early on March 13th, the barometric pressure dropped to 975 mb or 28.79 inches of mercury. As the system continued to strengthen while moving northeastward into Georgia, cold air continued to settle south and east which resulted in snow and blizzard conditions developing from Alabama and Georgia to the Carolinas and Virginia. In fact, snow even occurred as far south as coastal Mississippi, Alabama, and Florida where 1-2 inches was common. At the same time, a line of very intense thunderstorms or squall line developed in the eastern Gulf of Mexico and eventually moved through Florida and produced widespread wind damage and tornadoes.

This incredible storm system quickly moved up the east coast, reaching Delaware by the evening of March 13th and then Maine on March 14th, during which time it continued to strengthen. In fact, this storm became the most intense cyclone to impact the Eastern United States and produced incredibly low barometric pressures. This rapidly deepening storm produced a powerful pressure gradient which resulted in damaging winds and also produced a large swath of snow.  Almost every state east of the Mississippi received snow and both hurricane and tropical storm force winds occurred in spots from Florida up through New England. Snowfall amounts of 1-3 feet occurred across the Appalachians and the Northeast, with 50-60 inches even occurring in the mountains of Tennessee and North Carolina. Peak wind gusts of 54 to 93 mph were common along the east coast with the highest recorded wind gust occurring on top of Mount Washington in New Hampshire which reported a gust to 144 mph. In addition to the incredible snowfall amounts and damaging winds, record low barometric pressures occurred with the lowest recording occurring at the Westchester County Airport in White Plains, New York which reported 961.1 mb or 28.38 inches of mercury.

The March 12-14, 1993 Blizzard or “Superstorm of 1993” or “Storm of the Century” will always be remembered because not only was this storm historical in terms of its large scale and widespread impacts from the northern Gulf of Mexico to New England but it is not too often a winter storm is more significant than most landfalling hurricanes, while also producing snowfall in almost every state east of the Mississippi.